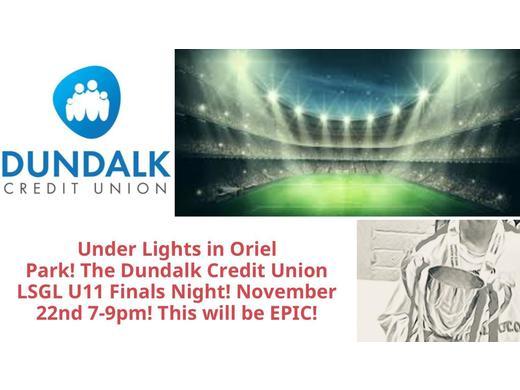 It has been a great start to the league's first ever competition. The group games have now been played and we now know what are the semi final line ups.

The semi finals are to be played on 19th/26th October or 2nd or 9th November - which is the final deadline. That is 4 weeks to play 2 games. **All fixtures to be confirmed by Wednesday night so referees can be assigned and website updated**

They are to be scored over two legs with an aggregate score,(no away goals rule) straight to penalties in the secound leg if teams are tied.

*Our finals night will be for all Under 11 teams*

⚽There will be a showcase game for teams who lose both Cup and Shield semi finals.

⚽The Finals night is going to be held on Friday the 22nd November in Oriel Park the home of League of Ireland champions Dundalk from 7pm to 9pm.

Games on finals night are 25 minutes ew with straight to penalties if tied.

Team pictures and club biography for finals night programme to be emailed to leagues PRO: Des.feeley@gmail.com ��